That’s right, on October 31, 1517, a professor of theology and Catholic monk named Martin Luther nailed 95 questions  – propositions – on the door of the Chapel at Wittenberg Castle Church. The sound of a hammer hitting a nail not only rang on the streets of Wittenberg, but sounded a revolution that has changed the world for five centuries. The revolution returned God’s Word to a proper understanding of God’s grace. The Reformation had tremendous implications for the universal Church. It’s pretty obvious, as we’re worshipping God’s pure grace 500 years later, how a bold and sometimes outspoken monk created a tidal wave of events we still see in orthodox Lutheran churches and around the world!

But if we look at the Reformation, or read about it, or watch television shows related to it, we’ll notice that all kinds of changes took place in the world because of Martin Luther’s stand against the church’s misguided leadership and false teachings in the church in his days. People will quickly talk about the cultural change that went along with getting the Bible into the hands of the common people in their own language. Sociologists will boldly talk about how much society changed for the better when someone finally challenged the Pope and the leadership of the church. Educators will praise the change in educational philosophy that went along with educating all people so they could, in turn, educate the members of their households. There is so much that we can talk about! But, what is the Reformation all about in the first place?

We need to remember the main point of the Reformation: It wasn’t about education, or sociology, politics, or culture. Luther simply wanted the Church to return to the Gospel. He didn’t want to start a new church. He wanted to reform the church that had abandoned the purity of God’s Word for the sake of the mundane. That’s what the Reformation should still be about today. Of all the 95 Theses, there’s one that stands out: Thesis 62 – “The true treasure of the Church is the Most Holy Gospel of the glory and the grace of God.” Certainly, it’s not unusual that, today, we hear about the Gospel, God’s grace, forgiveness of sin, and Christ’s righteousness given by God all the time. But, the Reformation invites us to go beyond the routine and “drill down” to experience the magnitude of the chain of events that had to all come together to bring us to this day.

It all started when a young Luther was set to go to school to become a lawyer. But, to his father’s great disappointment, young Martin opted, instead to become a monk. Luther was a wonk – one who studied hard, who began a relentless pursuit for a personal peace with God that had long evaded him. He agonized as he read in Paul’s letter to the Romans, “Now we know that whatever the law says it speaks to those who are under the law, so that every mouth may be stopped, and the whole world may be held accountable to God. For by works of the law no human being will be justified in his sight, since through the law comes knowledge of sin.” God’s Law was clear! By our nature and by our deeds, we are condemned sinners.

The more Luther learned about the depth of his sin, the more he tried to fix the problem of his sin. He didn’t just confess his sins, he sat with his Confessor for hours trying to recall every sin he did. He treated his body horribly with fasting, self-flagellation, and sleeping in snow, trying desperately just to punish himself for his sins. But the more he tried to please God, the more he realized his worthless efforts. As he soon discovered how his personal righteousness lacked any possibility for comfort and peace in his life, he became increasingly despondent and angry with God. In his deepest despair, Luther wrote, “How could God set up such strict rules, all the while knowing we would never be able to satisfy Him, that we would always fall short.”

But his studies continued as he read through the Scriptures. God’s Word clicked as he read Psalm 51. Luther began to see another side to God. God holds us to standards of holiness and faithfulness that we cannot achieve on our own. The only appeal we have before God is to appeal to His grace and mercy. God is the only means by which our sins are forgiven. Psalm 51 reads: “Have mercy on me, O God, according to your unfailing love; according to your great compassion blot out my transgressions.” 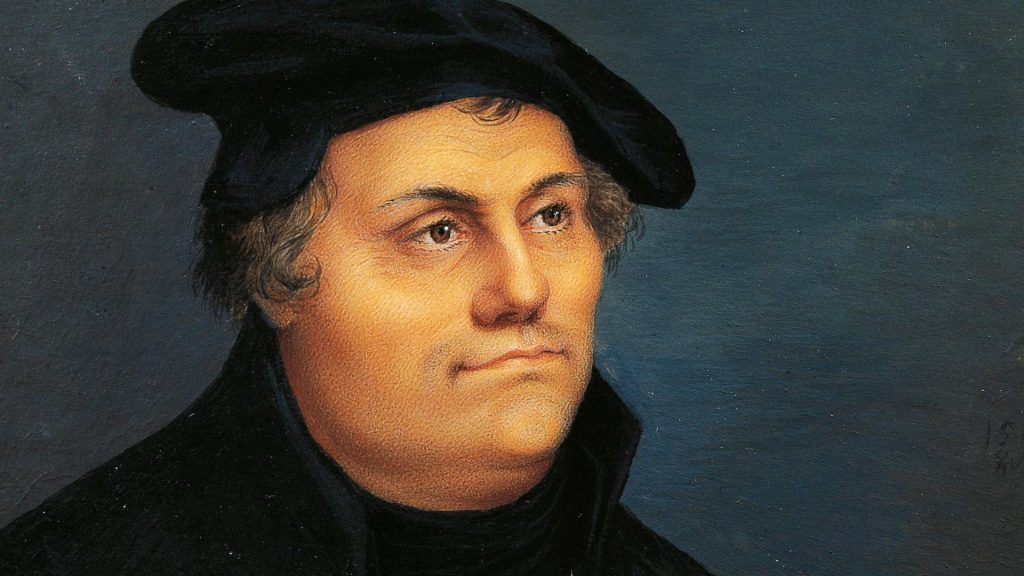 The central message of the Gospel is that God forgives His people through the merits of our Savior, Jesus Christ – justification. Christ’s righteousness is our only hope and assurance for peace with God. All of Luther’s efforts – penance, visiting ancient relics, self-punishment- were sin in themselves, since those seek satisfaction before God who sees only the perfect, atoning sacrifice of Christ as sufficient for our redemption. The Gospel message changed Luther’s agonizing search for self-righteousness. He re-discovered that it is God Who gives salvation, not as a prize, but as a free gift through the merits of Jesus Christ, by faith by the guidance of the Holy Spirit.

This is why we celebrate the Reformation. We have the truth! Not just the Law that condemns and shows us our sinfulness, but we have the Gospel truth that God gave Himself to take away our sins, and bring us the hope of eternal life. God sent His Son to suffer and die for our sins. Luther later coined this as the “Joyous Exchange” where our wretched sinfulness is exchanged for the perfect righteousness of Christ for us.

St Paul’s letter to the Romans says, “But now the righteousness of God has been manifested apart from the law, although the Law and the Prophets bear witness to it— the righteousness of God through faith in Jesus Christ for all who believe. For there is no distinction: for all have sinned and fall short of the glory of God, and are justified by his grace as a gift, through the redemption that is in Christ Jesus, whom God put forward as a propitiation by his blood, to be received by faith.”

The Reformation message is simple. It’s not about us, nor is it about Martin Luther. It’s all about Jesus and what He has done for us and our eternal salvation and peace with God. What we celebrate in the Reformation, as we join millions of Lutheran around the world, is completely about what God has done for us in Jesus Christ. We thank God for returning people to the Good News of Christ, our Savior, and we can continue to share with people who still live in darkness, that they may be led by the Spirit into the marvelous Light of Christ.